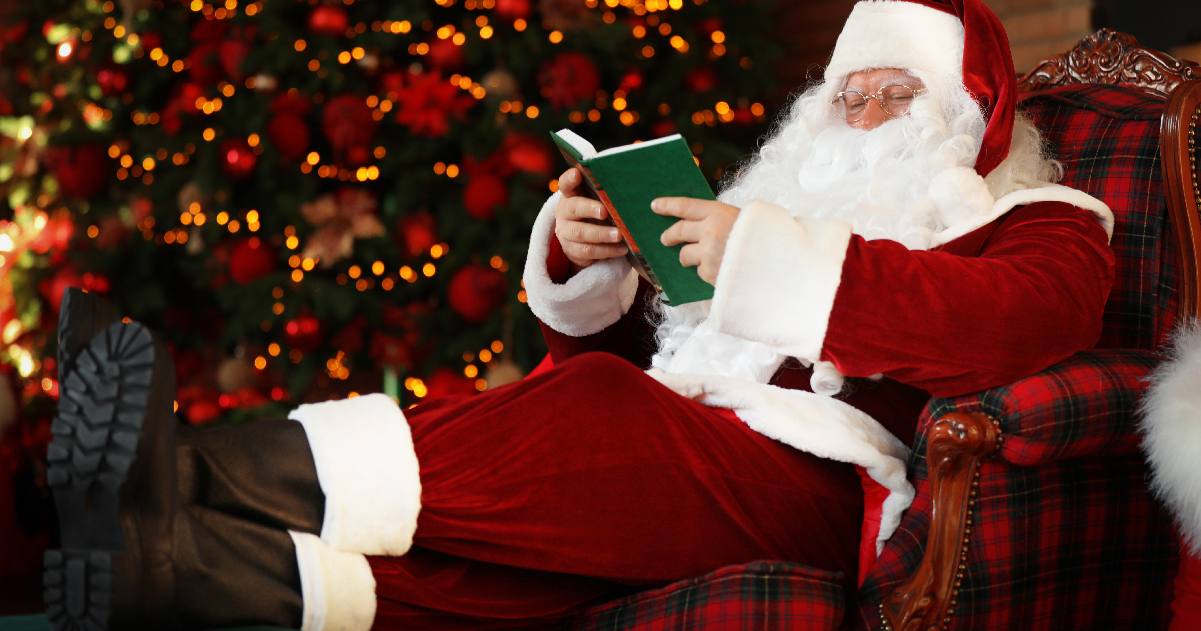 When I was in the third grade, Judy Blume nearly ruined Christmas for me.

Perhaps that’s a bit of an exaggeration, but after having enjoyed books like Tales of a Fourth Grade Nothing, Freckle Juice, and Otherwise Known as Sheila the Great, I never could have guessed that Superfudge would lead to my holiday undoing.

To explain how, a little background is warranted….

I love Christmas.  I love nearly everything about it.  And while I deeply appreciate that it can be a difficult time for many—particularly those whose faith traditions are different or whose memories are not fond—I unabashedly love the holiday.  The lights, the food, the tree, the gifts, the movies, and the decorations—all of it.

And for us, Santa has always been a big part of that.  I grew up believing in him and everything he stood for.  My parents did a phenomenal job of creating so much magic, that even as I heard whisperings at school about Santa not being real, I was so committed to Christmas and my understanding of it, that I obstinately ignored those “rumors.”

Always an avid reader, I spent time every night before bed reading and went through books at a rapid rate.  But in the third grade, as I was excitedly reading the compelling sequel to Tales of a Fourth Grade Nothing, Judy Blume decided to notify me that Santa was not, in fact, real.

After all, I believed everything I read.  And all of the sudden, I could no longer handily dismiss all the playground whisperings.

To say I took it well would be a complete and utter lie.

I do not envy my mom the parenting she had to do that night.

Now some of you may be thinking, “this is exactly why we don’t do Santa in our house.”  And if that works for you, I applaud you.  Santa is definitely not a one-size fits all kind of tradition.

But when we became parents, my husband I decided that the magic of believing outweighed the sadness felt that single night.  Especially in years like this one that feel like they take far more than they give.

But…what do you do when your kid asks “Is Santa real?”

This is a moment worth preparing for.  And it’s also a time to take a few deep breaths. Because even when you think you’re ready for it, it may catch you by surprise. I know it did when my older daughter asked me this question a few years ago.

“What do you think, Honey?” was my initial response.

She went on to explain to me why she had her doubts, and that she suspected I was actually Santa.

I took a deep breath, and then sat down with her and gave the real story of Santa. But in doing that I didn’t kill the magic or crush the dream.  Instead I let her in on the celebration of it and made her part of the magic.

To do that, I paraphrased a beautiful letter penned by Martha Brackenbrough, the author of the stunning (and highly recommended) book “Love, Santa.”  I share her letter with you now in the hopes it might be some help to you when the inevitable question comes, “Are you Santa?”:

Thank you for your letter. You asked a very good question: “Are you Santa?”

I know you’ve wanted the answer to this question for a long time, and I’ve had to give it careful thought to know just what to say.

The answer is no. I am not Santa. There is no one Santa.

I am the person who fills your stockings with presents, though. I also choose and wrap the presents under the tree, the same way my mom did for me, and the same way her mom did for her. (And yes, Daddy helps, too.)

This won’t make you Santa, though.

Santa is bigger than any person, and his work has gone on longer than any of us have lived. What he does is simple, but it is powerful. He teaches children how to believe in something they can’t see or touch.

It’s a big job, and it’s an important one. Throughout your life, you will need this capacity to believe: in yourself, in your friends, in your talents, and in your family. You’ll also need to believe in things you can’t measure or even hold in your hand. Here, I am talking about love, that great power that will light your life from the inside out, even during its darkest, coldest moments.

Santa is a teacher, and I have been his student, and now you know the secret of how he gets down all those chimneys on Christmas Eve: He has help from all the people whose hearts he’s filled with joy.

With full hearts, people like Daddy and me take our turns helping Santa do a job that would otherwise be impossible.

So, no. I am not Santa. Santa is love and magic and hope and happiness. I’m on his team, and now you are, too.

I love you and I always will.

When I shared this with my daughter, she actually lit up.  Knowing she was part of the magic made her feel so special, and she has used that magic for nothing but good ever since.

In giving her space to grieve, but also in turning the news into something loving and kind and joyful, the moment of her discovery was substantially different than mine.  Rather than having the magic ruined by a loud, demanding, and mischievous toddler prone to temper tantrums (Judy Blume’s “Fudge”) my daughter was able to keep on believing.

And that, my friends, feels magical.